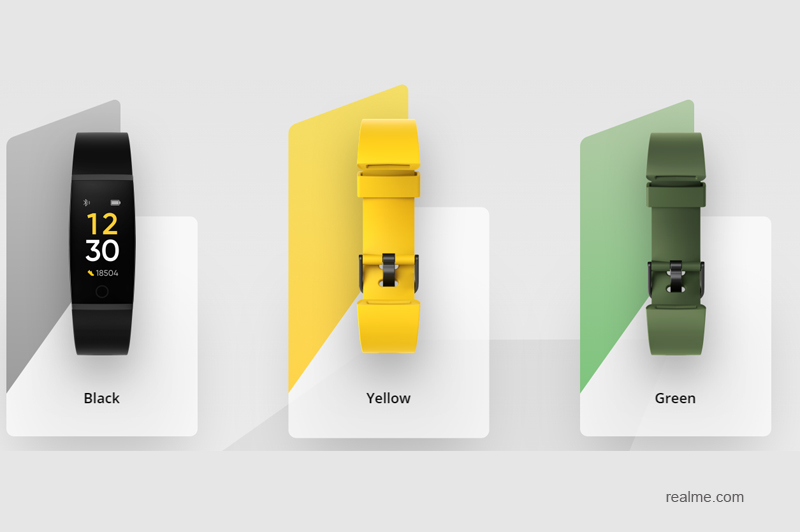 Realme Band with real-time heart rate monitoring and a colour display has debuted in India. Designed as a competitor to the Mi Band 4, the Realme Band comes with features such as USB Direct Charge and smart notifications.

The fitness band also includes five personalised dial faces. Further, there are three strap colour options to choose from. The Realme Band can be connected with an Android smartphone using the Realme Link app.

The fitness band also has a dedicated Cricket Mode that is aimed especially for Indian users.

The Realme Band features a 0.96-inch (2.4cm) colour TFT LCD panel that has 80×160 pixels resolution. The display features a touch button is kind of a let down. It also supports five-level brightness that can be adjusted through the Realme Link app. Further, the display panel wakes up with a lift of your wrist using the built-in gravity sensor similar to all other bands.

Minimalist sleek design looks cool on your hands. Pricing at Rs 1,499/- at Indian market should be working well for Realme as their competitor MI Band 4 is currently selling at Rs 2,299/-

The realme Band features a dedicated Cricket Mode, which has been designed specially for India.

Water alert and Ideal alert should be a happy inclusion in the Band.

Where as MI Band 4 hold for minimum 20 days. Also the realme Band can store any 3 out of 9 sport modes. For selecting a different sport, use the realme Link app.

Realme Band can withstand occasional dips in the water but cannot be used in Pool. Where as MI Band 4 can be used for swimming in the Pool.

Realme Band should be a good value for the Money, but will they be competitive against MI band 4 and Honor Band 5. Not Sure !!

Unsafe to Hackers a ton of Ruckus wireless routers

TRAI Changes Rules for DTH, Cable TV Tariffs: Something has Changed for Customers